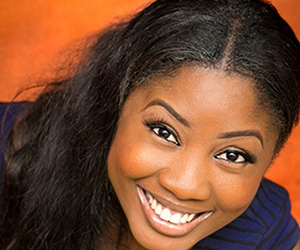 “BellaRose Iyere-Okojie is a Mass Communication graduate from the Redeemer’s University. A seasoned broadcaster and cheeriest of the pack, BellaRose is the morning show host on City 105.1fm having started her broadcasting career as an associate producer with Africa Independent Television (AIT) and later co-anchored the Ultimate Morning Show on Raypower Network until 2013 where she moved to Inspiration fm.

Famous for her unique laughter and versatility, she clinched a 1yr contract for co-host duties with ace broadcaster Dan Foster on Let’s go Naija, a nationwide syndicated CSR/music radio show sponsored by Shell Nigeria where she spoke fluent pidgin English. Once a writer for TW Magazine, BellaRose is also a contributing writer and editor on techcityng.com.

An award winning actor with a flair for creative brainstorming and a vast knowledge of the technology ecosystem, she juggles radio hosting with responsibilities as a church worker, voice acting, emceeing events and TV shows, acting, writing, singing backup in her sister’s band, reviewing gadgets and cooking a la Food Network.”

POSITIONING YOURSELF FOR FUTURE OPPORTUNITIES IN THE VOICE OVER BUSINESS